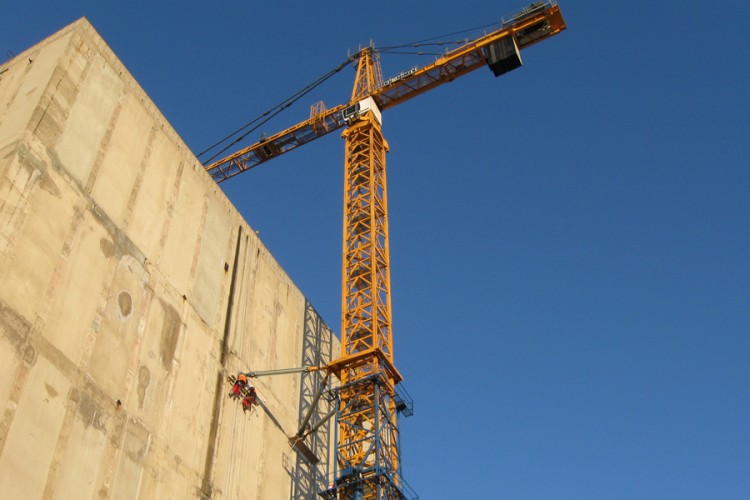 In the south between Nitra and Levice, there are four blocks of Nuclear Power Plant with pressurized water reactors VVER 440 / V 213, each with 470MW capacity. The first block of power supplies electricity to the grid by the summer of 1998, the second block from the end of 1999. Completion of Units 3 and 4 block is the largest private investment in the history of Slovakia, and MO34 are one of three nuclear power plants currently being built in the EU. On completion of Mochovce would be to invest in 2013 should total 2.7 billion. euros.

Each block of SE-EMO produces annually about 3000 GWh of electricity, which covers nearly 10% of electricity consumption in Slovakia. Daily will save about 46 wagons of coal, which would be burned in thermal power to obtain the same amount of electricity. After completion of the third and 4 block nuclear power plant in Mochovce, together with the existing first and 2 block, restore energy independence of the country and meet about 45% of domestic electricity consumption. 3. block should be put into operation in 2012 and 4 block in 2013, where the performance of each block will be 440 MW. 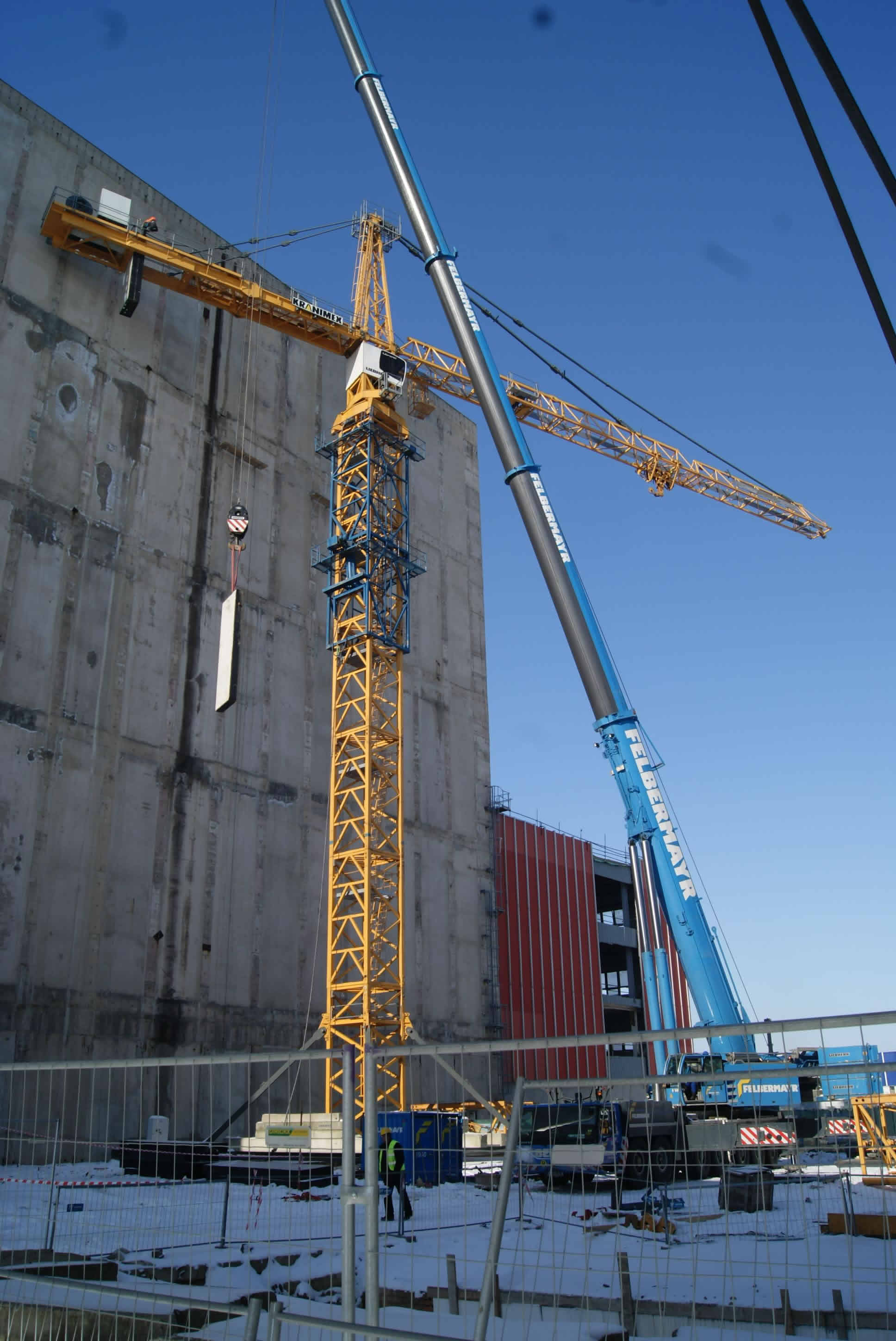 Mochovce units are among the latest nuclear VVER 440 / V 213 and benefit from all improvements that were made at the plant. The highest safety standards and procedures used technology places extreme demands on technology that is needed for construction of a NPP. Company Kranimex Ltd. with as the exclusive representative of the Liebherr construction cranes in Slovakia, secured for subject project construction tower crane Liebherr 630 EC-H 25 Litronic, with a hook height of 63.5 m, radius of 37.4 m and load capacity 19,600 kg. Maximum capacity is 25,000 kg crane on 29.7 m. 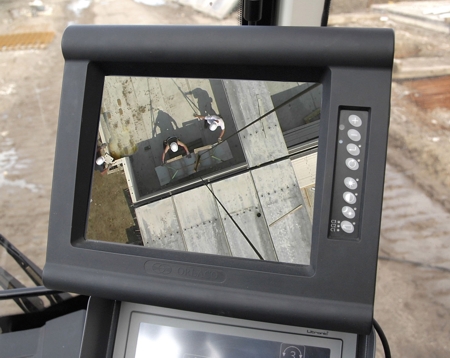 On behalf of the difficult conditions on the side, best solution for the deployment of the crane came in charge. Already in the preparatory stages Kranimex, Ltd. actively cooperated with the Liebherr Werk Biberach technical department, especially with proposals backed by static calculations. Originally designed version of freestanding crane Liebherr 630 EC-H25 Litronic, proposed at the 63.5 m hook height, total of 216 tons of central ballast on a stationary base undercarriage – 10 x 10 m. 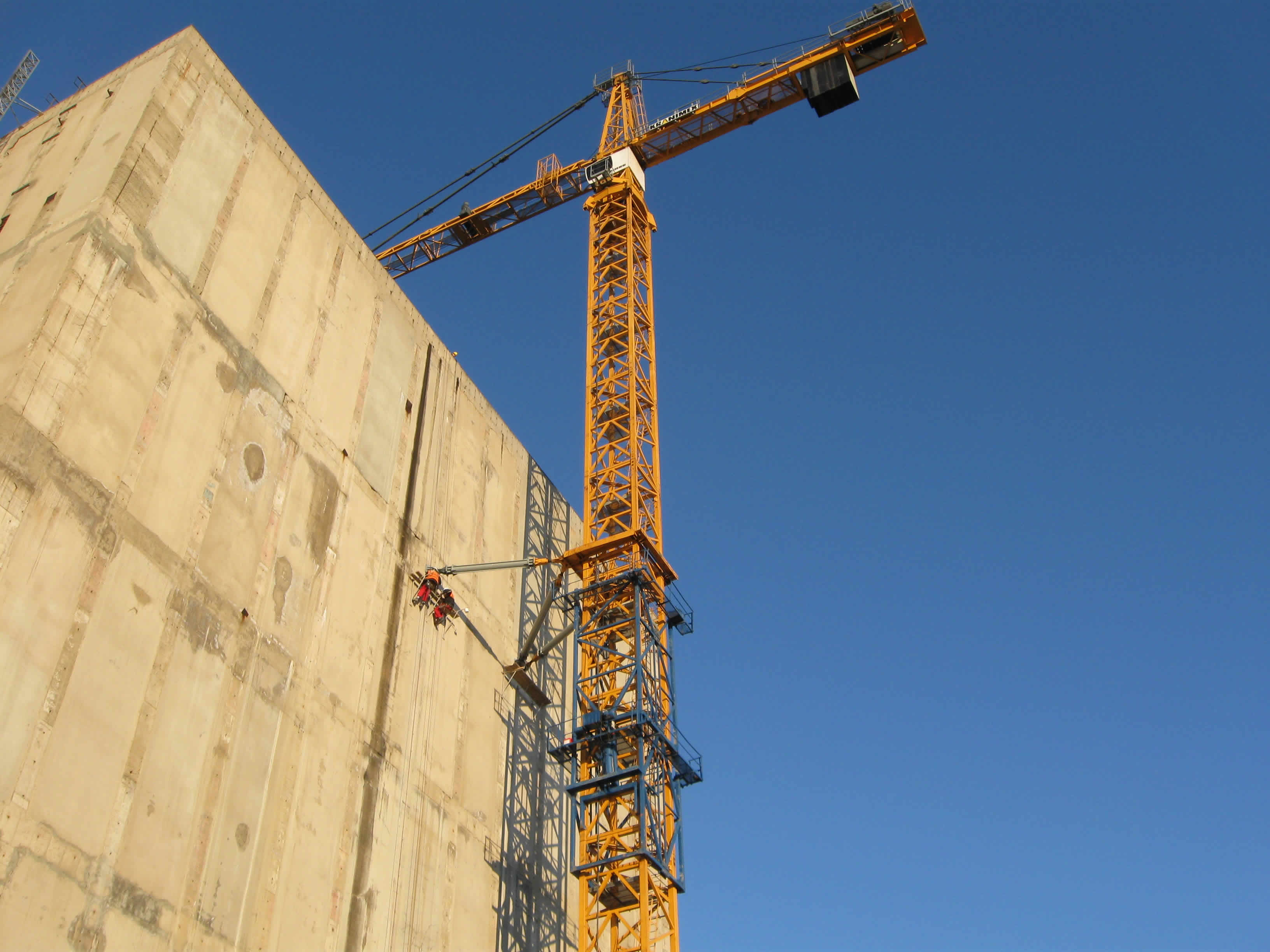 As a second and the best solution, was to design the tower crane to be anchored onto the NPP block at height of 37 meters, which reduced the required central ballast to only 54 tons and eliminated swinging of the crane to the minimum. The proposed solution, substantially reduced the corner pressure to the base of the crane and not least, it is necessary to mention the savings in transport costs and safety increase to the maximum level.The 30m axial distance between the tower crane and vertical stack located next to the power block, it was necessary to program the Litronic system and implement the restriction area within the crane radius, defined as the collision zone. Therefore, subsequently revealed the need for anchoring of the jib onto the building, when crane is out of operation. 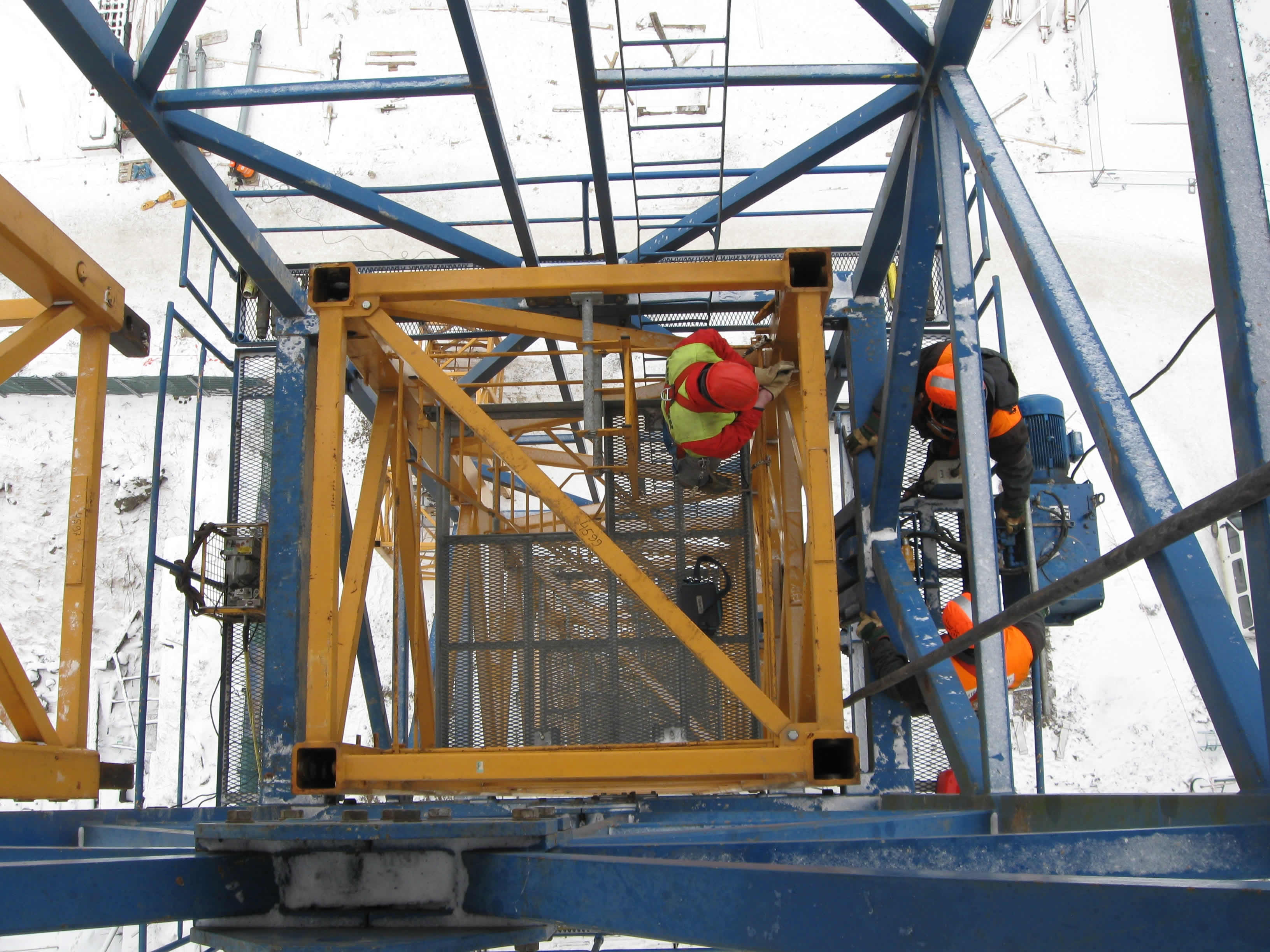 Another specific requirement for the equipment, was a crane camera system with a camera placed on the trolley, with the monitor in the cabin, for the continuous transmission and sensing of the load. For this purpose the company Kranimex, Ltd purchased and installed a special “Orlaco” camera system. 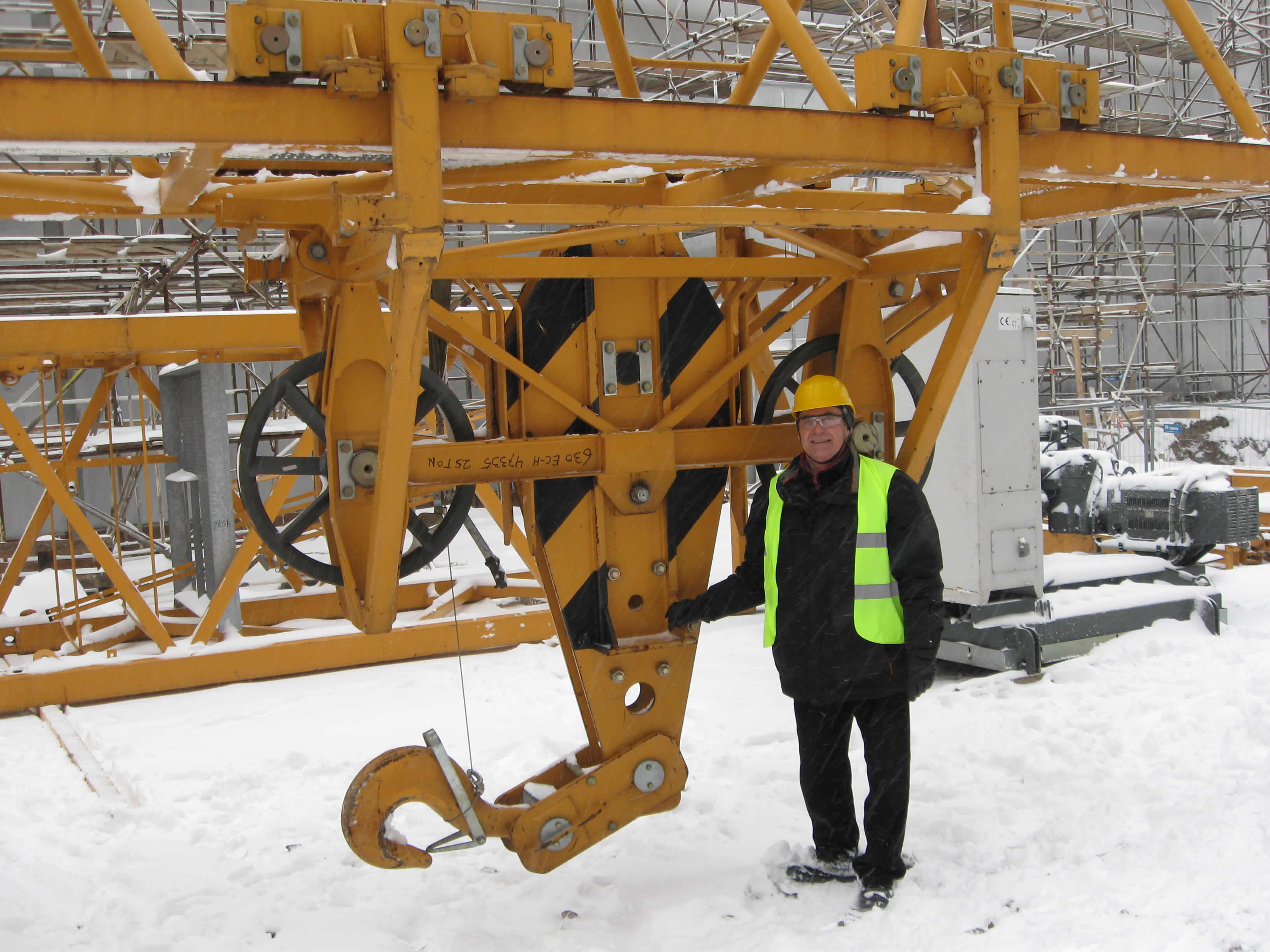 The mere assembly takes place in two main stages, where in the first phase was built configuration of 39.5m using 400 tons mobile crane LIEBHERR LTM 1400 -7.1. Subsequently crane was climb up, adding 4 tower sections with the usage of telescopic equipment located on the tower of Liebherr 630 EC-H25 Litronic, to the final height is 63.5 m,and the crane was anchored onto the building using anchoring frame and three anchoring arms.

Project completion of units 3 and 4 in Nuclear power plant Mochovce is a challenge for both human and technical aspects for all involved in. During realization of such challenging projects, mostly appears – where is the potential or limit of individual companies. And the tower cranes are not the exception.

Crane Liebherr 630 EC-H25 Litronic is the largest construction crane Liebherr, which was ever deployed in the territory of the Slovak Republic.