A Liebherr 355 HC-L 12/24 Litronic luffing jib crane, as the last remaining crane on site with a hook height of 618 metres, has placed the tip on the Royal Clock Tower in Mecca. The installation of the golden crescent moon on the tip of the skyscraper is proof positive of the great performance capacity of the crane from Liebherr. 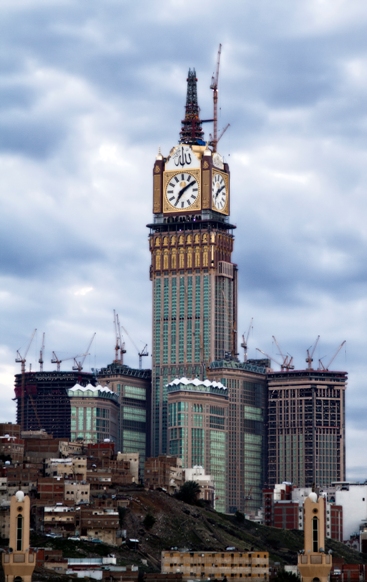 The gilt crescent moon crowns the building, at a height of 601 metres. The assembly of the crescent, made up of five segments weighing 12 tonnes each, and with a diameter of 23 metres, was an extremely tough challenge. The prefabricated parts were lifted one after another by a second luffing jib crane onto a platform at a height of 393 metres, where the valuable individual components were pre-assembled, and then carried aloft on the hook of the 355 HC-L to the tip of the building to create the finished crescent moon. 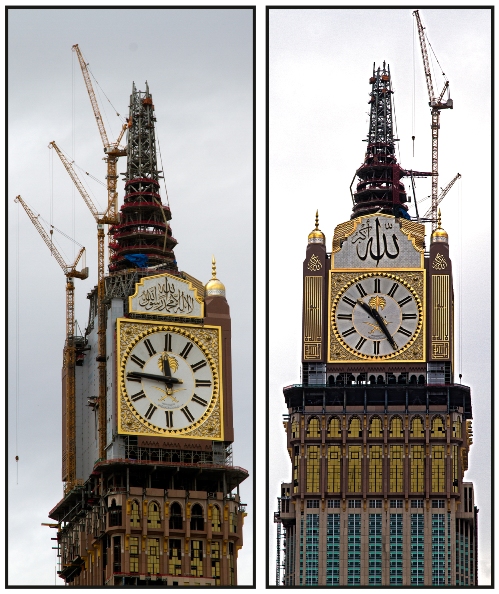 Over the past ten years, some 30 Liebherr luffing jib cranes of the HC-L series, with ratings from 160 to 355 metre-tonnes, have been hard at work on the site. The facade, including the top structure with the crescent moon at the tip, was completed right on schedule before the start of Ramadan, the month of fasting.

The Royal Clock Tower, the second tallest building in the world, stands at the heart of the Abraj Al Bait Complex in Mecca, and accommodates a first-class hotel spread over 76 storeys. The tip of the building is partly accessible on foot, and includes a viewing platform at a height of 558 metres. At night, when the faithful are called to prayer, the crescent opens and searchlights send beams of light 10 kilometres into the heavens above the Holy Place.